Gestures can be like that famous western – good, bad and ugly. Today we’ll talk a bit about gestures that became famous after being featured in a movie, TV or the internet. No middle fingers, don’t worry, only the legit fun stuff!

1. Air quotes (“finger quotes”, “ersatz quotes”)
This particular gesture was first used in the “Celebrity Charades” TV show in 1979. Initially it resembled a quote or a phrase. The trend then spread to other TV shows like Friends and, basically, any other sitcom of the 90’s. The most prominent “abuser” of the air quotes was Dr. Evil from the legendary spy comedy “Austin Powers” but we’ll get to him later. Nowadays the finger quotes are mostly used to express satire, sarcasm, irony or euphemism and not actual verbatim quotes.

2. Vulcan salute a.k.a. “live long and prosper”
First appearing in the second season of “Star Trek”, this seemingly basic gesture ended up being too difficult for many members of the crew. Without practice or the covert pre-positioning of the fingers the actors simply could not do it. Luckily, Mr. Nimoy didn’t have those issues.

3. Jean-Luc Picard’s Facepalm
The sci-fi hit “Star Trek: The Next Generation” made famous one of the most recognized gestures in pop culture – facepalm. Masterfully performed by none other than Patrick Stewart himself, it eventually became a meme as we know it today.

4. Hand heart*
This gesture was used by Asians long before Taylor Swift noticed it. She then started using this sign in her live concerts, and popularized it among other celebs. Justin Bieber, Demi Lovato, Selena Gomez, Katy Perry and many others are using it until this day saying “heart you” to all of their fans.
*- technically this one is not from movies or TV but I still feel it belongs here.

5. 3-finger salute, Hunger Games
Most of you know this sign from the “The Hunger Games” trilogy. It is used in the movies and books to express unity with people of the districts. What you didn’t know, though, that it was used in 2014 by a group of anti-government protesters in Thailand, 7 of whom were arrested for it. 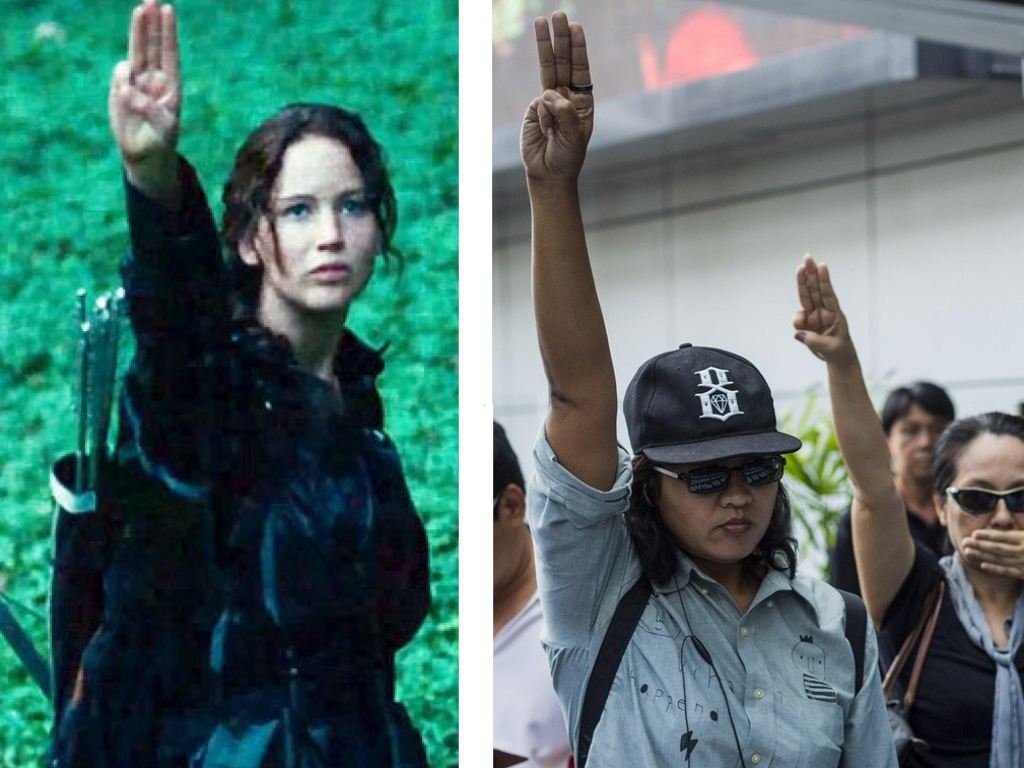 6. The “blah-blah-blah”
You know that moment when someone just keeps yapping and won’t shut up? What do you usually do? You give them the blah-blah. Sure, it’s bit rude but someone has to do it, right? This gesture can be seen in countless movies and TV shows, especially in the 90’s.

7. Fistbump
The origins of bumping or pounding fists can be traced all the way back to the late 1800’s, when fist bumping was a form of a greeting among gloved boxers. It was then popularized by the Wonder Twins from Hanna-Barbera’s “Super Friends” cartoon in the 70’s.
Fun fact: the gesture is a part of the natural behavior observed in some primates in the wild.

8. Ancient Aliens
The “aliens” gesture became a meme almost immediately after an episode of “Ancient Aliens” series on History Channel first aired in April of 2010. This gesture is now used to express things that are hard to understand, like women, cats and IKEA instructions. How many times have you used this gesture in the past few months? I’m not saying a lot but… “a lot”. Yeah, this works better when you can actually show the gesture.

9. Loser sign
To do the L-shaped gesture extend your thumb and index finger and put it against your forehead, yes, that’s right. Congats, you’re officially a loser now! Jk, jk. This gesture owes its popularity to the most brilliant 90’s comedy “Ace Ventura: Pet Detective”. If you’re new to this world, you’ve probably seen a lot of it on “Glee”, since it’s their secret handshake or something. I don’t know. Who even watches “Glee”?

10. Neil deGrasse Tyson Reaction a.k.a the “badass” rage meme
Big lovable science geek Neil deGrasse Tyson also made the list with his famous “we got a badass over here” gesture. It was his reaction or rather an explanation of how Sir Isaac Newton invented calculus before his 26th birthday. The video that turned him into a meme was uploaded to YouTube back in June, 2011. 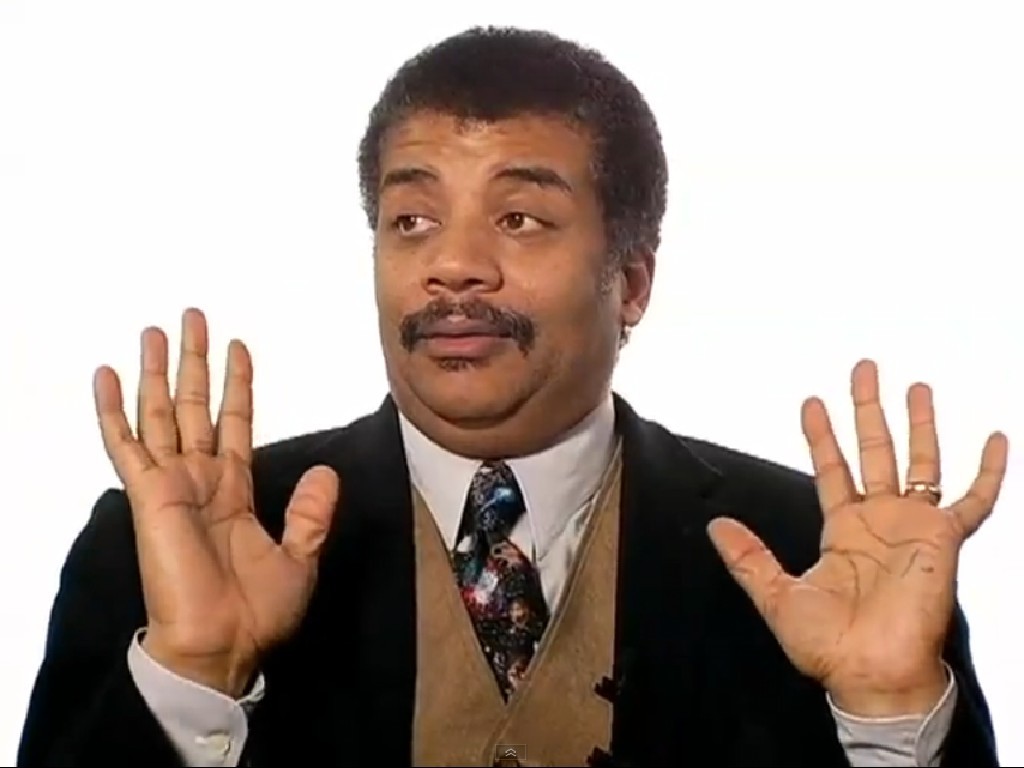 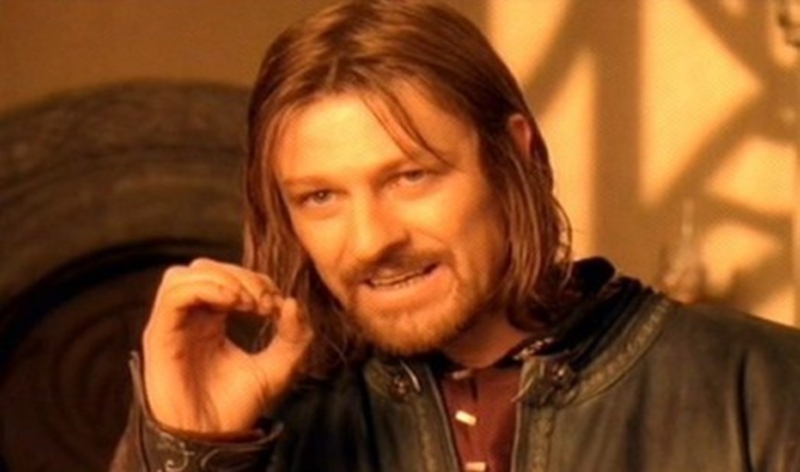 12. I’m watching you
What does it take for a military signal to become an internet meme? Robert de Niro’s character in the “Meet the Fockers” movie certainly made this gesture better-known, eventually turning it onto a meme, but the original meaning was not “I’m watching you”. It means “enemy in sight”, which wouldn’t go well in the context of that movie.

13. Doctor Evil’s little finger
And we’re back to Dr. Evil again! One of the best spy comedies ever not only gave us machine gun breasts but also Dr. Evil’s menacing pinky. If you haven’t watched “Austin Powers” yet, I seriously don’t know what you’re still doing here.